A surf trip to The Wedge in Western Australia 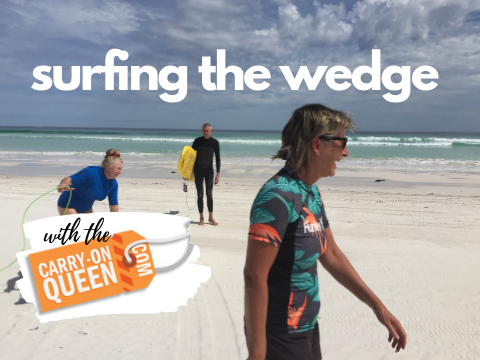 “Ah yah, WillyWeather says the Wedge will be cracker in the morning – 2.3 WSW moderate swell. She’s an ebb ‘til mid-morning, then a flood. Weatha’s hot. I recon we should surfies tomorrow – grab our bathers, boardies and head on up.”

Which roughly translates to “The weather looks good, let’s go surf at the Wedge tomorrow.”

And so it began. Our plan to surf The Wedge went from backyard banter over beer and wine at a weekend barbie with longtime family friends from Perth, to reality the following morning. It also became one of the highlights of visiting Western Australia this past March. That’s how we found ourselves the next day, a car full of four 50+ year old friends, roaring down the highway, tunes playing, with six surf boards on our roof, and not much caution in our wind. We departed Perth early morning, giddy with anticipation, our destination an isolated and pristine area 180km north of Perth, known as Wedge Island, or as locals call it, “The Wedge.” 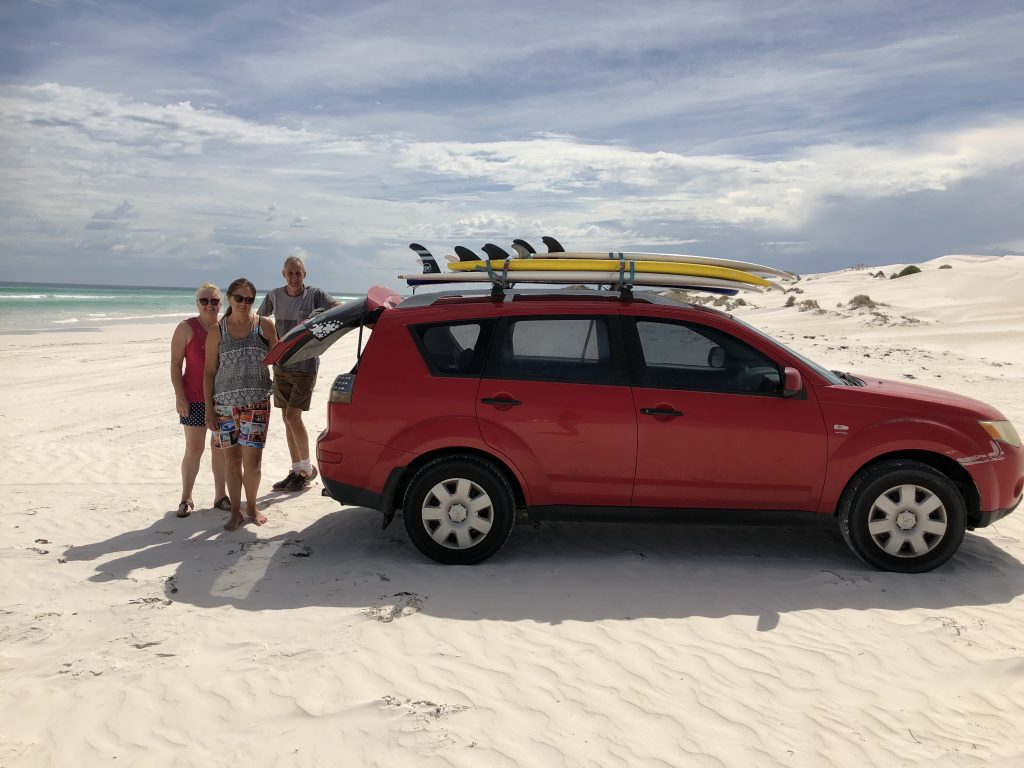 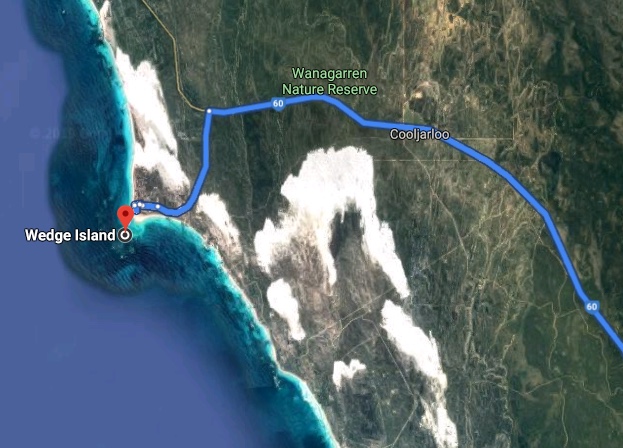 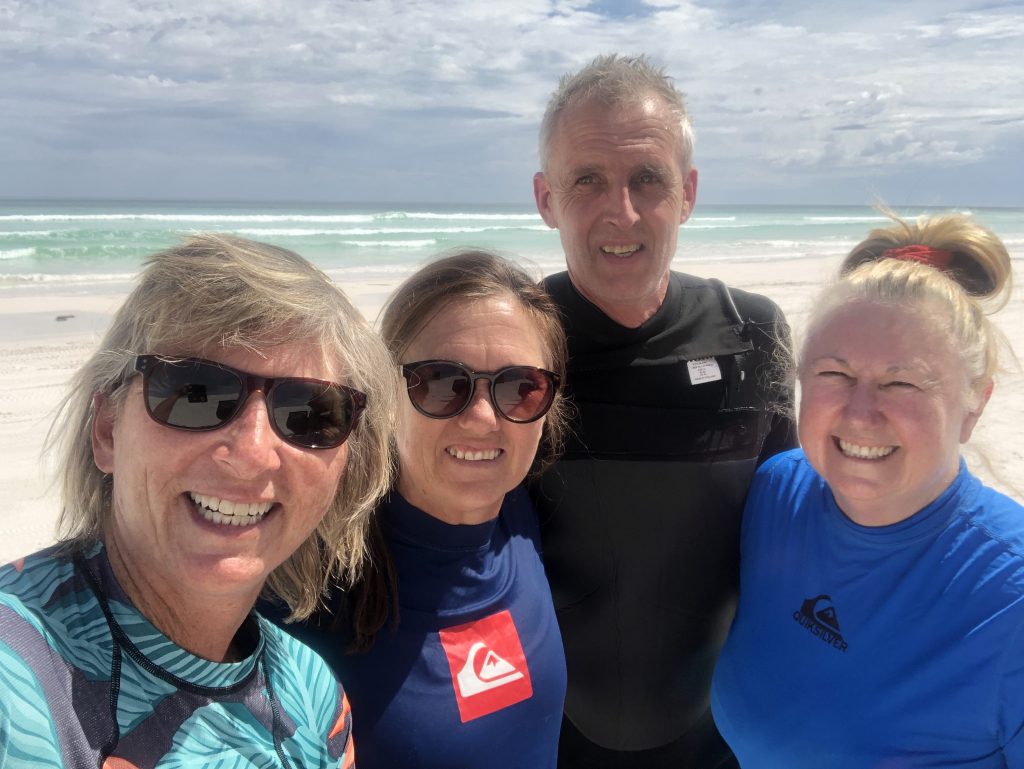 Wedge Island is actually one of 40 islands within the Turquoise Coast Islands Nature Reserve. Accessible only by 4 x 4 vehicle, for the most part sand dunes stand untouched, and the beach stretches unpopulated for miles. The Wedge is also home to a settlement of hap hazard beach shacks built in the 1950s. Constructed from corrugated metal and salvaged wood, some of these buildings, best viewed as adult versions of tree forts on the ground, have stood the test of time, some have taken on modern design touches, while others have been reclaimed by blowing sand and wind – buried and forgotten.  The Wedge appears to stand still in time, a quiet place that guards fierce loyalty from a generation raised experiencing it. 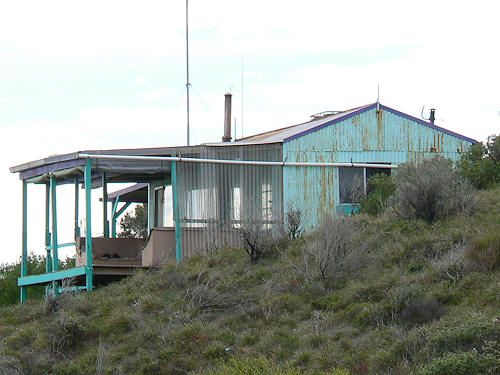 The area we entered was at Jurien Bay Marine Park, through a beach access break in the dunes. From there we drove along the beach road – which really isn’t a road, but simply an area of hard enough packed sand at low tide to be passable. 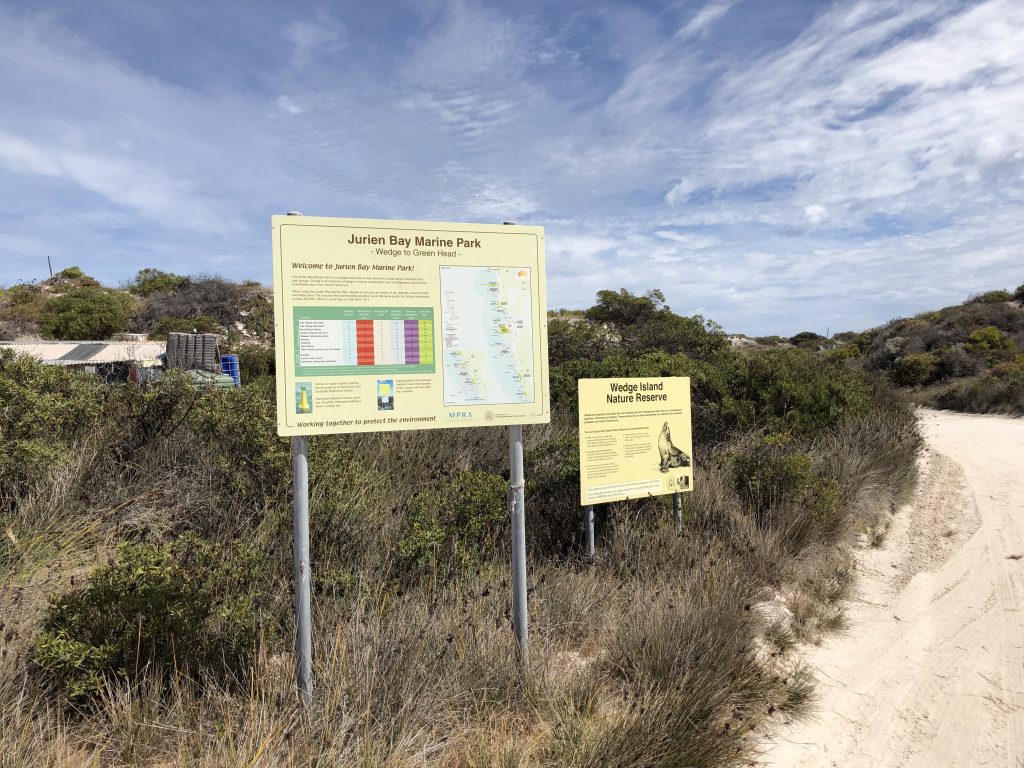 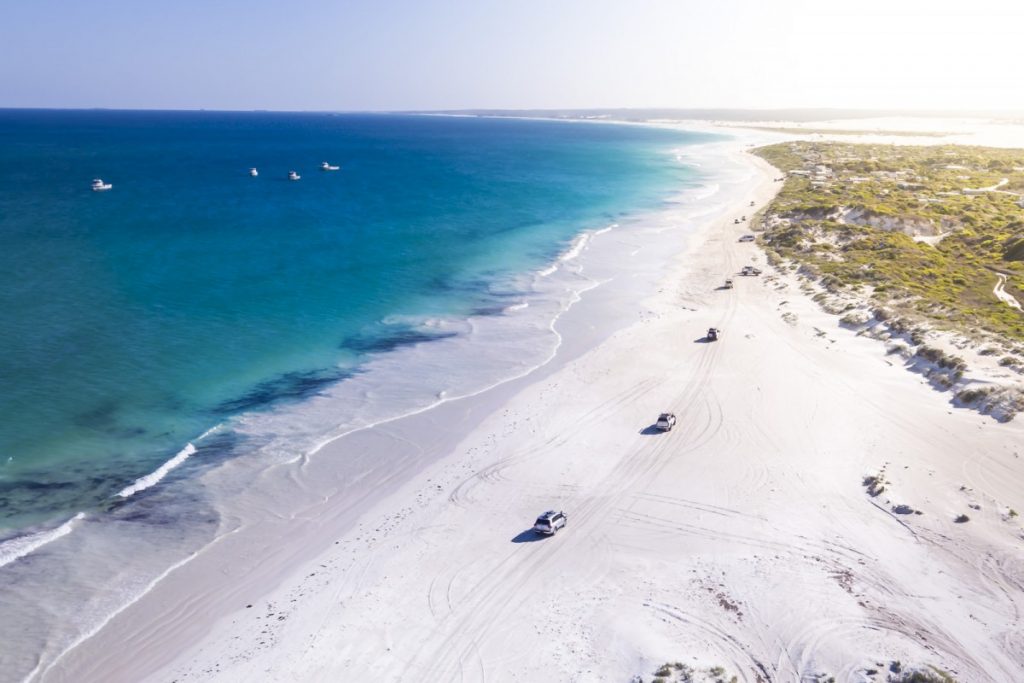 My friends insisted on switching up to let me drive, so it was fun to feel the vehicle response to the deep dry sand of the dunes, not unlike driving in fresh light powder snow in Canada. I jokingly offered to signal when they indicated we should go right entering the beach area, but clearly there was no need. We were one of only a couple vehicles on the beach that day. The fine white powder sand at the Wedge stands in contrast to the blue sky and light aqua coloured sea. In a country that is defined by the beauty of beaches on both coasts, you might be hard pressed to declare the best one, but the Wedge in WA is easily a contender as top prize for isolated beauty.

After driving along the beach for 10 minutes, we parked by a dune and unloaded our surf gear. Hopping from the car and its protected AC environment, we were hit with a blast of windy hot air, but there was giddy anticipation as everyone suited up, donned rashies (shirts to guard against board rash), surf shorts, and bathed our bodies in SPF 50+ sunscreen. The sun was wickedly intense and the air was pumping waves of heat, but once we were immersed in the warm ocean water, all was right. 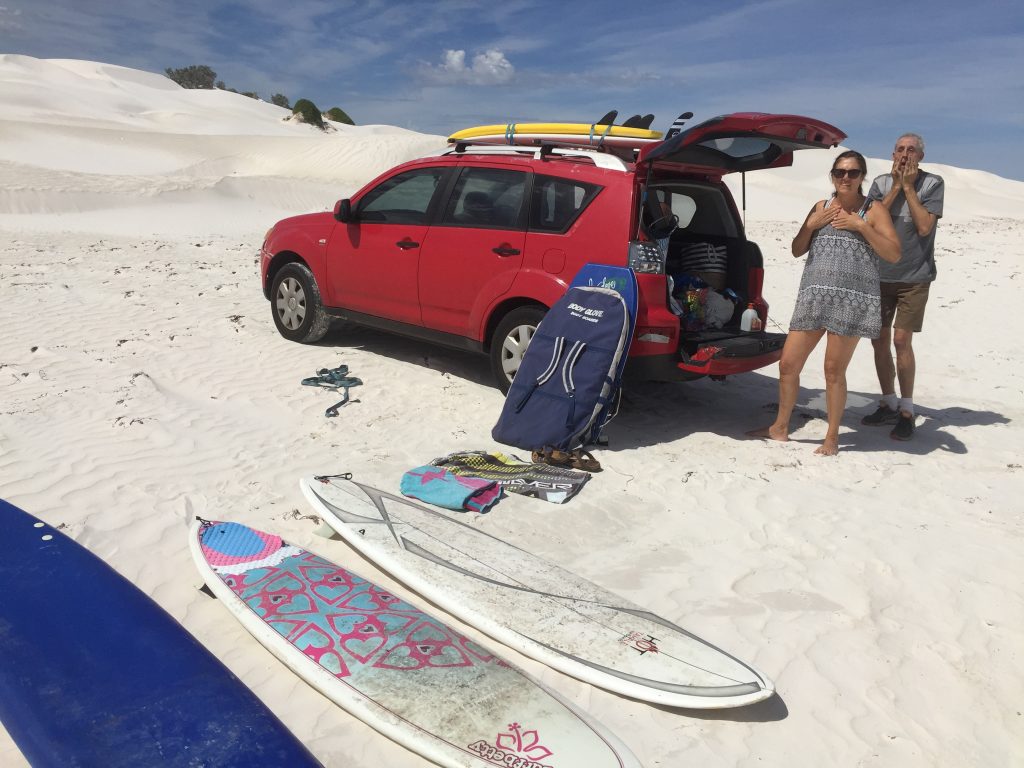 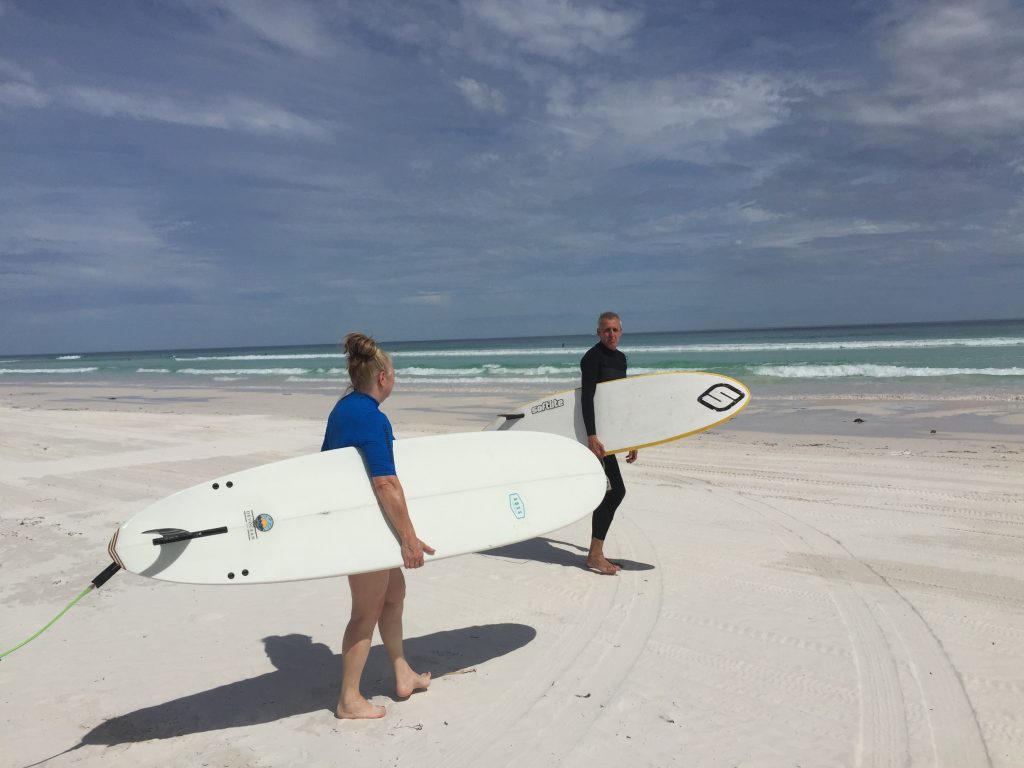 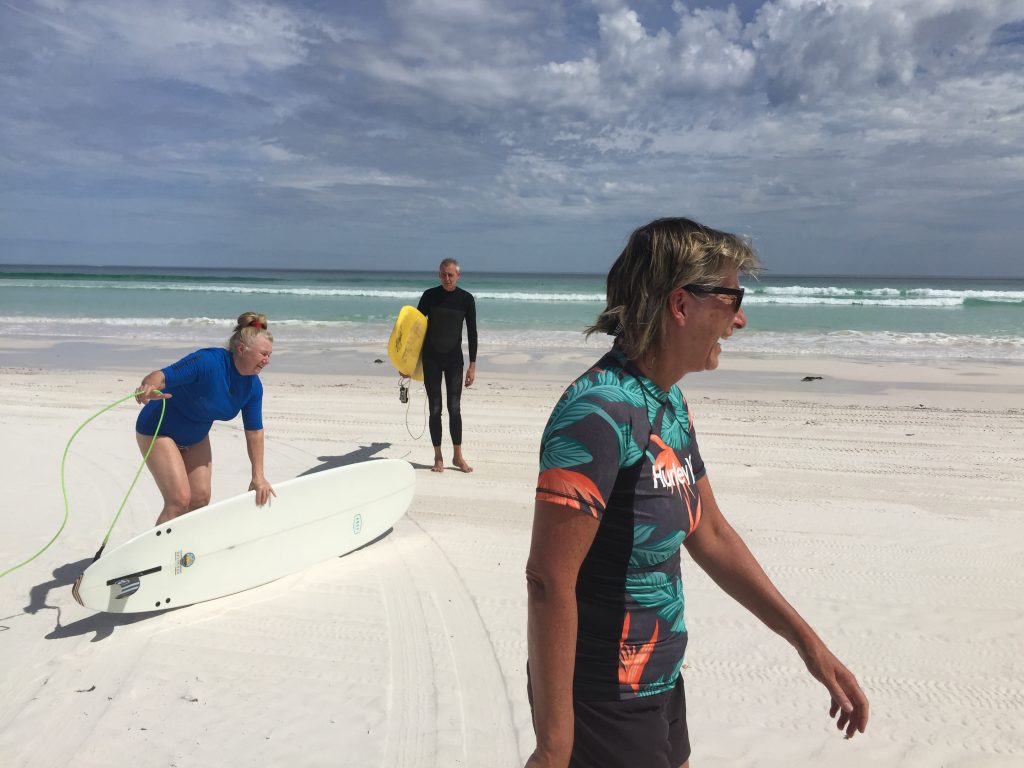 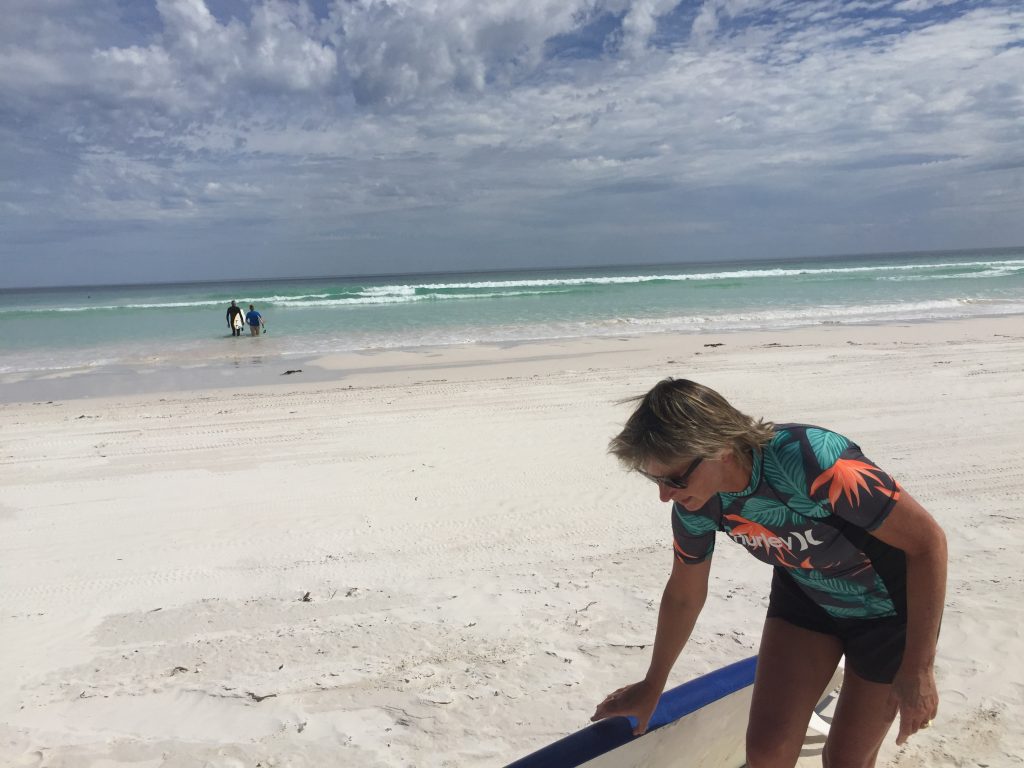 The waves were gentle by more experienced surfer standards, but at around 2-3 meters, they came in consistent predictable sets, and were delivered over a long shallow reach without undertow, that allowed catching repeated runs and long rides. The waves made us heros on our boards, consistent enough to believe we were better than we thought, and for a few brief moments that afternoon, this group of long-time friends relived our youth. At least that’s the movie that played in our heads. I’ll freely admit it may not have been what others watched. 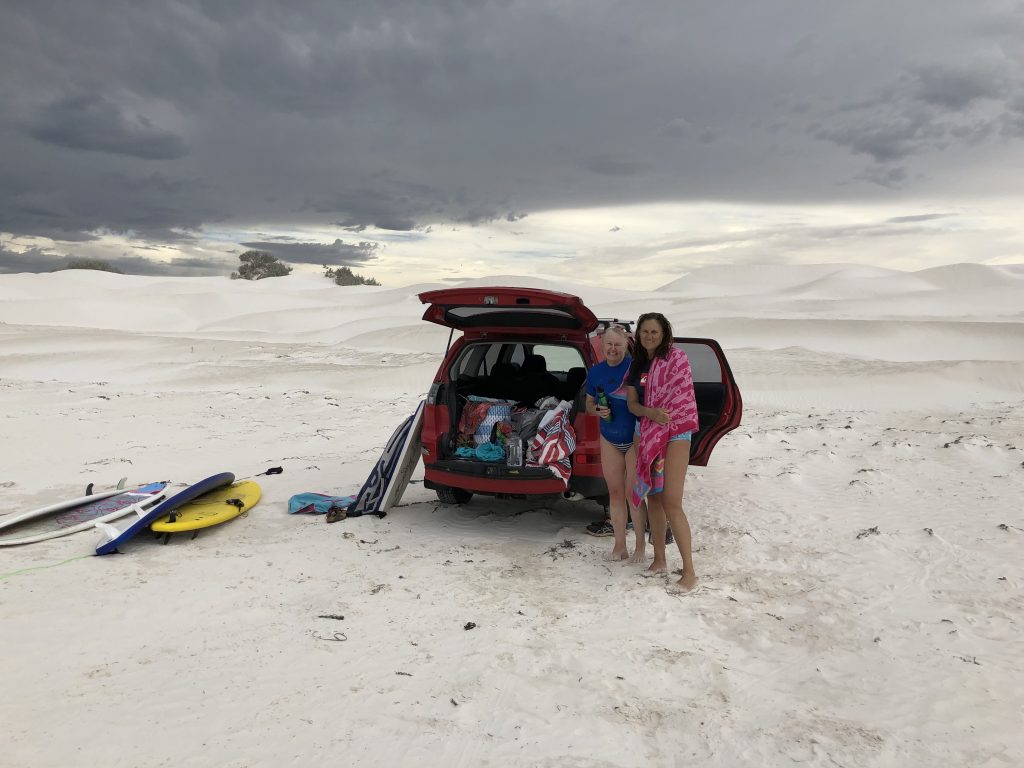 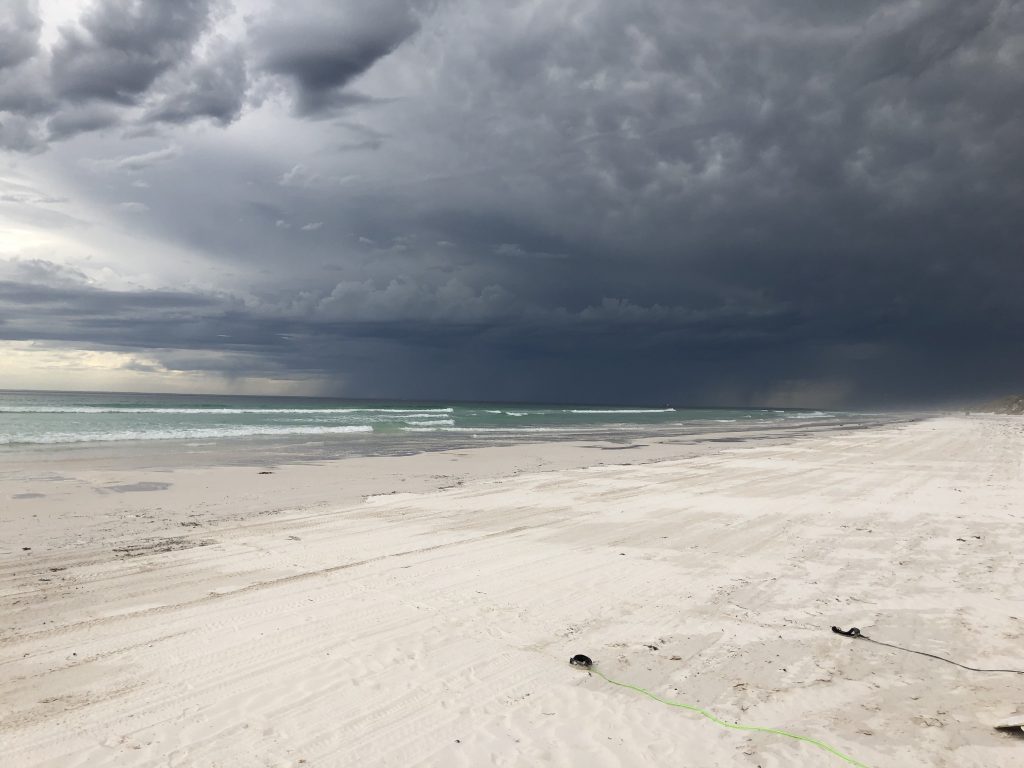 We surfed until exhaustion kicked in. And later with a thunderstorm festering on the horizon and threatening our safety, we bailed once flashes of lightening were visible at a distance. 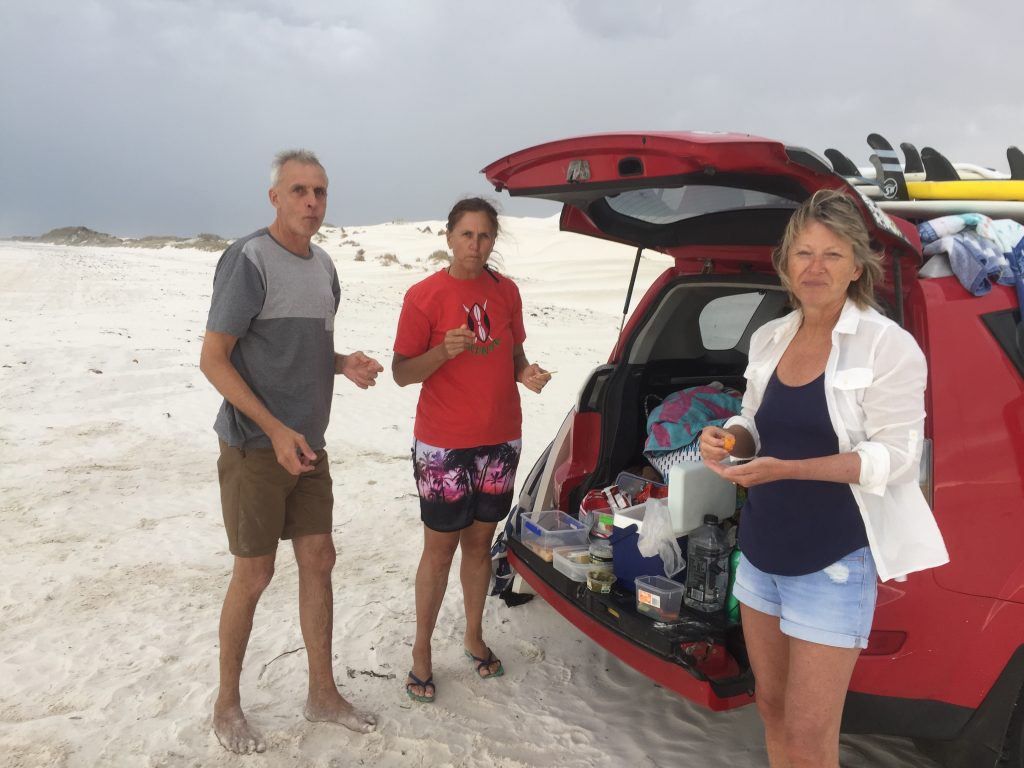 With smiles permanently etched on our faces, and with tan squint lines to prove it, we packed up the 4 x 4 and headed back to Perth late afternoon. We were a car full of parents, feeling like tired kids, doing our best to hold a conversation, while fighting off head bobs and yawns. We all appreciated a good night’s sleep that evening at home, but I’m pretty sure there were still visions of surfers dancing in our heads!

Here’s a fun video from the CarryOnQueen Youtube channel that pretty much sums this post up. I challenge you to not have a smile on your face, and be planning a trip to Australia after watching it!

Getting to the Wedge: There’s really only one way to get to Wedge Island – and that’s by road. So you’ll either need friends with a 4 x 4, or RENT A CAR. Out of Perth, take Row St to Mitchell Fwy/State Route 2 in West Perth. Drive State Route 60 for 160km. There are a few suburban settlements stretching out from Perth along the way, but after that it’s mostly just wind-blown dunes mixed with tufts of vegetation and the odd roo along the way.

Staying at the Wedge: While camping on the beach is prohibited, there certainly are lots of shacks in various states of care or decay, and I’d be willing to bet a few might show up in an Airbnb search. But if you want something a little more certain, and legal to boot, you might try a place in Lancelin, about 30km south of Wedge Island. Hotels range $120-140. There’s a YHA Hostel at $58/night, and a caravan park with sites priced at $20/person for powered caravans, and $15/person for tents. Check out Trip Advisor for some options and comparison pricing. Private homes show up on Booking.com too, so there may well be other interesting options, depending on your needs. The “Salty Shack Lancelin” looks crisp, clean, and cute as a button for example, is a freestanding cabin on its own with kitchen facilities, and rents for $94/night.


Lancelin has its own beach area too, but for the more coveted pristine isolated experience, hop in your car and drive the extra bit north. You will however need a 4 x 4 to drive the beach road. And you’ll need to know your tides to navigate getting in and out of the area safely. You don’t want to mess up and find yourself swamped in waves, and loose a car to the surf. And taking a mechanically sound vehicle is also well advised, since a breakdown on a rising tide will not end well.

Guidebooks and inspiration: Lonely Planet Guide books have been my “go to” source for years. Check out THIS LINK for not only their content on Western Australia, but guide books, pocket guides, city guide and maps for all of Australia. And if you need even more inspiration, check out EXPERIENCES of AUSTRALIA

This post contains affiliate links, which at no cost to you, help us to continue to provide helpful travel content, while supporting reputable travel companies we have used ourselves.

Want the inside scoop?

Get monthly inspiration & tips for your next travel adventure, plus the option to download our "Packing Light Tips Sheet"

You have Successfully Subscribed!

We value your friendship and will never share your email address with anyone. We hate spam too!
Once a month, receive free, valuable travel insights from CarryOnQueen.com. Unsubscribe at anytime.